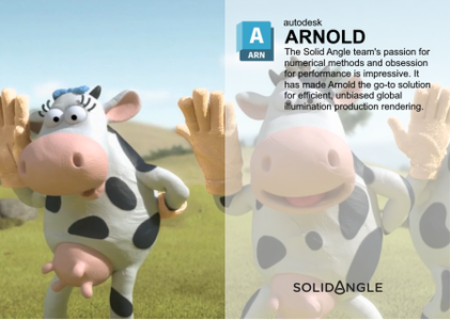 
2.4.1 for Cinema4D. This update uses Arnold 7.1.2.2 and is a bugfix release brig a number of fixes related to skydome light and python bindings.
- ARNOLD-12443 Crash when calling AiUniverseCacheFlush on a skydome light without a render session
- ARNOLD-12345 [GPU] skydome_light not updating when disabled
- ARNOLD-12365 Fix python bindings with types for fixed arguments in variadic functions
- ARNOLD-12438 Update python bindings for python 3
rendering library, or API, developed by Solid Angle and used by a number of prominent organizations in film, television and animation, including Sony Pictures Imageworks. It was developed as a photo-realistic, physically-based ray tracing alternative to traditional scanline based rendering software for CG animation.
Arnold uses cutting-edge algorithms that make the most effective use of your computer's hardware resources: memory, disk space, multiple processor cores, and SIMD/SSE units.
The Arnold architecture was designed to easily adapt to existing pipelines. It is built on top of a pluggable node system; users can extend and customize the system by writing new shaders, cameras, filters and output driver nodes, as well as procedural geometry, custom ray types and user-defined geometric data. The primary goal of the Arnold architecture is to provide a complete solution as a primary renderer for animation and visual effects.
supports most Cinema 4D features such as instances, cloners, deformers, generators, MoGraph geometry, hair, and ThinkingParticles. It also supports both animation and single frame distributed rendering in Team Render, allowing the use of all computers in a local network to speed-up Arnold rendering. Third-party plugins TurbulenceFD and X-Particles are natively supported, allowing artists to render high quality smoke, fire, and particle effects with fully interactive feedback. Other features include volume rendering with OpenVDB, a node-based material editor and a comprehensive list of shaders and utilities, including vertex maps and per-face materials.
SL is the technology company behind the Arnold rendering software, with offices in Madrid and London and customers throughout the world including Framestore, DreamWorks, ILM, Sony Pictures Imageworks, MPC, The Mill, Mikros Image and Rising Sun Pictures. Arnold was designed from the ground up to efficiently raytrace the complex geometric datasets required for feature�-length CGI animation and big� budget visual effects, while at the same simplifying the pipeline, reducing the number of passes, minimizing storage requirements and greatly enhancing interactivity for lighting artists.
Solid Angle Cinema4D to Arnold
4.2.4.1
x64 english
Windows / macOs *
3.5 Gb