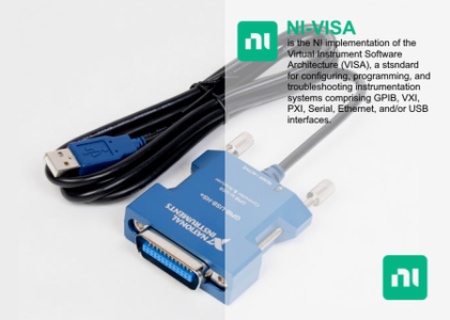 The National Instruments team is pleased to announce the availability of NI-VISA version 21.


5, is the NI implementation of the Virtual Instrument Software Architecture (VISA), a standard for configuring, programming, and troubleshooting instrumentation systems comprising GPIB, VXI, PXI, Serial, Ethernet, and/or USB interfaces.
is a standard for configuring, programming, and troubleshooting instrumentation systems comprising GPIB, VXI, PXI, Serial, Ethernet, and/or USB interfaces. VISA provides the programming interface between the hardware and development environments such as LabVIEW, LabWindows/CVI, and Measurement Studio for Microsoft Visual Studio. NI-VISA is the National Instruments implementation of the VISA I/O standard.
NI-VISA includes software libraries, interactive utilities such as NI I/O Trace and the VISA Interactive Control, and configuration programs through Measurement & Automation Explorer for all your development needs. NI-VISA is standard across the National Instruments product line. With NI-VISA, you can feel confident that your software development will not become obsolete as your instrumentation interface hardware needs evolve into the future.
The history of instrumentation reached a milestone with the ability to communicate with an instrument from a computer. Controlling instruments programmably brought a great deal of power and flexibility with the capability to control devices faster and more accurately without the need for human supervision. Over , application development environments such as LabVIEW and LabWindows/CVI eased the task of programming and increased productivity, but instrumentation system developers were still faced with the details of programming the instrument or the device interface bus.
Instrument programmers require a software architecture that exports the capabilities of the devices, not just the interface bus. In addition, the architecture needs to be consistent across the devices and interface buses. The VISA library realizes these goals. It results in a simpler model to understand, reduces the number of functions the user needs to learn, and significantly reduces the and effort involved in programming different interfaces. Instead of using a different Application Programming Interface (API) devoted to each interface bus, you can use the VISA API whether your system uses an Ethernet, GPIB, GPIB-VXI, VXI, PXI, or Serial controller.
Finally, most instruments export a specific set of commands to which they will respond. These commands are often primitive functions of the device and require several commands to group them together so that the device can perform common tasks. As a result, communicating directly with the device may require much overhead in the form of multiple commands to do task A, do task B, and so on. By driving the formation of the VXIplug&play Systems Alliance and the IVI Foundation, National Instruments has spearheaded standards for higher-level instrument drivers that use VISA. This makes it easier for the vendors of instruments to create the instrument drivers themselves, so that instrumentation system developers do not have to learn the primitive command sets of each device.
has equipped eeers and scientists with tools that accelerate productivity, innovation and discovery. NI's graphical system design approach to eeering provides an integrated software and hardware platform that speeds the development of any system needing measurement and control. The company's long-term vision and focus on improving society through its technology supports the success of its customers, employees, suppliers and shareholders.
NI-VISA
21.5
x86 or x64 multilanguages
Windows *
1.2 Gb