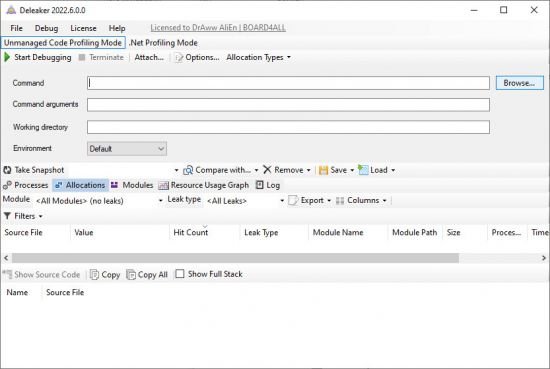 Deleaker is an extension for all major IDEs and a standalone application for memory leak detection - memory, GDI, and handles so far. Even the most stable of Windows applications are not immune to resource leaks. And of all the bugs and issues, memory leak detection tends to be the most difficult, especially when found in GDI objects and menus. And the golden rule of thumb is that the sooner bugs are found and dealt with, the less expensive they prove to be.

While there's no shortage of tools and add-ons to help track down memory leaks, few are capable of tracking GDI resource leaks that can devastate Windows performance. Deleaker is one of the few tools capable of this, and will have a minimal impact on your application's performance.
Deleaker is a memory leak detector that integrates with all major IDEs: Visual Studio, Delphi, C++ Builder, and Qt Creator.

What Does Deleaker Offer?
Find all the memory leaks
It doesn't matter what type of leaks are occurring, Deleaker will find them all: memory leaks (produced by heap, virtual memory, or OLE allocators etc.), GDI leaks, leaks of Windows USER objects and handles.

Integration with Qt Creator
Deleaker provides a plugin for Qt Creator to check memory leaks in C++ and Qt. Whenever it's necessary, you can explore allocated memory, GDI objects and handles. Navigate to the source code of a leak to fix it without leaving Qt Creator.
Watch video Tutorial