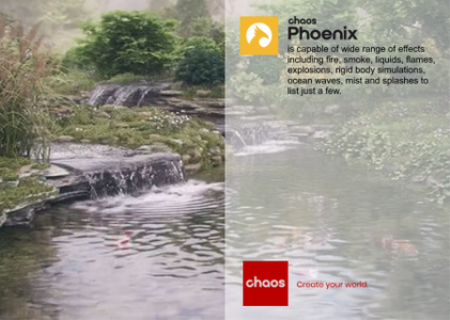 
01.00, the latest version of its fluid simulation software for Autodesk 3ds Max. This update is primarily a quality improvement release, but there are some changes in functionality.
With the Chaos Phoenix 5.01 hotfix we added support for V-Ray 6.
Using V-Ray 6, now Phoenix's Particle Shader will render in Points mode with V-Ray GPU.
Also, now with V-Ray 6 CPU Phoenix can render the Normals, Velocity, Cryptomatte and Multimatte render elements in the default Volumetric mode, without needing to switch to the slower Volumetric Geometry mode of the Simulator or the Render as Geometry mode of the Particle Shader.
With any version of V-Ray CPU, Phoenix can now render volumetrics using a custom Phase Function, allowing you to control of the Smoke does forward scattering of light (allowing you to render realistic clouds) or backscattering (allowing you to render more realistic dust and smoke).
With V-Ray 6 for 3ds Max, the Probabilistic Volumetrics options are no longer in the Phoenix atmosphere and can be controlled from V-Ray's render settings.
Now all of the Simulator options are available in the Phoenix Standalone Simulator - we added Splash, Mist and Foam, as well as Resimulation.
Sources can now Mist particles into the simulation directly.
As always, we sped up different parts of the simulation and rendering and fixed a few bugs, most notably in the FLIP liquid solver and Active Bodies, as well as in the Particle Shader and Standalone Previewer.

is an all-in one solution for fluid dynamics. Simulate fire, smoke, liquids, ocean waves, splashes, spray, mist and more. Built for 3D artists who want to create dynamic FX using quick presets, fast setup and intuitive controls. Preview and render interactively in the viewport. Adjust simulations on the fly. Create all types of physically-based fluid effects with fast, flexible controls for rendering, retiming and refining simulations. Integrated seamlessly into 3ds Max and optimized to render with V-Ray. Compatible with top industry tools such as Alembic, Krakatoa, Stoke MX and OpenVDB.0, the latest version of its fluid simulation software for 3ds Max and Maya. The update introduces Thruster force and Axis Lock controls for scene objects affected by simulations, new options for controlling foam patterns generated by liquid simulations, and a new Voxel Shader.
In addition, a new standalone edition makes it possible to process Phoenix scene files from the command line, outside the host software; while the Maya edition now runs on macOS as well as Windows and Linux.
and specializes in developing easy to use, powerful and affordable software for 3D computer graphics and visual effects. Our technology helps artists and designers create photoreal imagery and animation for design, television, and feature films. Corona Renderer is widely used in arch-viz, automotive and product design, and also features VFX capabilities.
Chaos Phoenix
5.01.00 for Autodesk 3ds Max *
x64 english
Windows *
781.1 mb